We don’t have the L or a subway … we have the METRORail. It’s pretty new to us – just 7 years old. But if you’re going from downtown to Midtown, the Houston Museum District, Hermann Park, the Texas Medical Center, or Reliant Park, the Red Line is the bees knees (right now we only have one line – the Red Line, but in the future the Houston rail system will definitely grow).  Here’s a local’s guide to how I rail jump [note: cops do troll the cars, just buy a pass – it’s only $1.25 each way for 3 hours.] So, for let’s say $2.50 – $3.75 in transportation [that’s cheaper than gas, parking or a taxi] you’ve got one heck of an evening. Here are some suggestions of libation hot spots along the Red Line rail line, with METRO as your friendly DD for the evening.

Voice at Hotel Icon – the rail doesn’t go to the Houston’s famed Anvil bar but, have no fear, you can still get a Bobby Huegel [one of this year’s James Beard nominees] designed cocktail. Bobby contributed a few stellar sips to Voice’s cocktail menu – my fav being the Vesper. Did I mention Wednesdays the martinis are just $1. Gotta love recession pricing. Side note:  Voice is located inside Hotel Icon. The name says it all – it’s iconic; like a blast from the past. Kudos on décor and history.

Hearsay – I still say ‘that fab new place” even though it opened a couple years ago. I love Hearsay. Again, located in a historic building – its predecessor had stories of hauntings  I only hope are still true. [I love a good ghost story!] Hearsay has an old world, almost prohibition feel; tall brick ceilings, secret opulence, great cocktails but tucked away in an unassuming and easy-to-overlook store front.  And a good menu. Confession: I took a pic of the Vesper ingredients off Voice’s menu and showed it to the bartender at Hearsay – perfect replicate.

Market Square: If Extreme Makeover: Home Edition did city lots – Market Square would take the cake. For years, this block stood dark and historic. A mainstay for the downtown lunch crowd but one would tread lightly after dark. But then, almost a year ago, voila! The transformation was complete. You could [and should] just spend an evening in Market Square. The famed Treebeards lunch is a southern must but they close at 2:30pm. So what is one to do for happy hour? Check out their Facebook page for live music updates. Stroll thru the park, then grab a glass of wine at one of the oldest haunts in Houston, La Carafe, but bring cash, they don’t play that plastic business. Then head across the street to Warren’s Inn – a true watering hole where the mixers are only for color, not to flavor your drink. If you do happen to partake in one too many at Warren’s, Frank’s Pizza is stumbling distance and another Houston staple.

Flying Saucer – Don’t order a Miller Light here… with 240+ beers at least venture outside your country [or maybe go hyper local with a Houston brewed Saint Arnold]. Check out the wall for their fire sales for hourly specials.  And, AAM friends, even though you won’t be in town long enough, you can make like a local and sign up for the UFO Club because let’s face it, you’ll be back and who wouldn’t want to be known as a Beerknurd?!

McGowen [between Bremond and Dennis]

Barcadia – a serious newcomer at just months old, you can show off your PacMan skills on any number of vintage arcade games or maybe pinball is more your thing? Sundays you can sport your championship skeeball jacket. Think a rockabilly Dave & Busters but smaller – with loads more attitude.

Leon’s – this is where I first ran into blues legend, Little Joe Washington, completely unbeknownst to me … smoking in the back alley. He played me a few songs. And the rest is history. Since my first loner visit to Leon’s I was hooked. The old narrow bar with low-hanging chandeliers, the piano, the bad plumbing [since remodeled] and the old phone booth out front – it’s the people that make Leon’s. Belly up to the bar and enjoy the characters.

Reef – Sure, Bryan Caswell has been written up in every magazine imaginable … so really what else can I add? Oh, the happy hour wine menu. Sit in 3RD BAR’s glass walls, order the scallops and enjoy some of the best food in Houston … nay, the country.

Ensemble [between Holman & Winbern] aka my favorite block in Houston 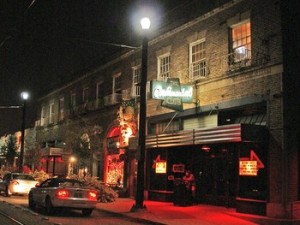 Continental Club – This unassuming building brings the best boogie-woogie in Houston. Local and touring artists call Continental home; from old school county to 70s disco; a Beatle’s cover band to local Texas rock. Stop in for cheap Lone Star or a backyard party – this is Houston. 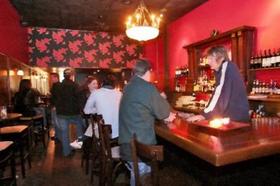 Mink – In size, it’s a hole-in-the-wall; in personality, it’s a mansion. Choice wines, good beer, local music and good décor … you’ll have to shimmy your way down the narrow bar but it’s still one of my fav hangouts. There late? Check out the Backroom for live music in an upstairs attic-like atmosphere.

T’afia – famed Top Chef contestant Monica Pope’s brainchild, t’afia has a killer happy hour but is worth a stop at anytime. Of course, Houston embraced her before her fame. Monica here bleeds local – and the community supports her the same.   t’afia is like dining at your mom’s house … but more style … and dare I say better food 😉

Museum District [between Ewing and Binz]

Hotel Zaza – Monarch – I wrestled with whether to start or end our rail hop in Museum District. After all t’afia’s happy hour is a must, while Monarch’s scene just isn’t there ‘til after 10. It personifies after-hours glam … jeans or sequins … end your eve on their fantasy lit patio; find a dark deco corner inside; grab a glass of chompers … the adventurous book a room and take the bottle to the pool.  Either way, Monarch makes a perfect finale to your rail adventure – whether you make it back to where you started or not.

This entry was posted in Drink. Bookmark the permalink.